In common pumping applications, the centrifugal and positive displacement pumps are normally the pumps of choice. For the most part, they perform adequately; that is, assuming the flow is Newtonian, the NPSH is met, and there are neither dissolved gases nor suspended solids. However, what does one do when these conditions are not met. A good choice for pumping "unfriendly" fluids is the Disc Pump.

Principle of Operation
The patented Disc Pump works mainly from one important principle: fluid flow via viscous drag. The pump does not transport fluid by making contact with an impeller of any type. Rather, it uses a set of rotating, parallel disks - called the "discpac". The rotating disks pull the fluid through the pump using viscous drag. Thus, since there is no impingement, viscous fluids, suspended solids, and entrained gases cannot cause damage to the pump. 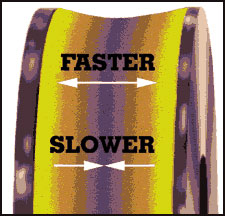 Figure 1. Fluid moves its fastest at the plate surface. 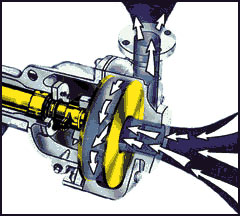 Applications
The Disc Pump has a multitude of applications in the Chemical, Oil and Gas, and Petroleum Refining industries. Central to the application of the pump is its ability to handle "unfriendly" fluids. Applications include the following examples:

New ANSI Pump
Recently, a new version of the Disc Pump has been introduce onto the market: the ANSI 2000 pump. The pump meets all the ANSI requirements and still retains the unique characteristics of the Disc Pump that make it so useful in handling "unfriendly fluids".

She continues, "At 660 cPs, the ANSI 2000 uses half the horsepower of available ANSI centrifugals. It gets more efficient as viscosity rises and handles higher levels - in excess of 40,000 cPs. Other ANSI pumps lose 50% of capacity when entrained air levels reach 6%, and fail at 7%. The ANSI 2000 handles levels many times higher, exceeding all current ANSI designs."