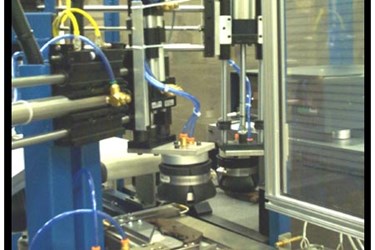 The operating cost for the energy necessary to mix fluids with a motionless mixer is usually far lower than for any competitive mixing technique. An extruder which melts, mixes and pressurizes polymer chips uses up to 0.1 kWh per pound of plastic processed. A motorized rotary in-line mixer uses 0.01 kWh per pound of material mixed. A motionless mixer operating with 10 psi pressure drop uses only 0.00001 kWh per pound more energy than is normally required to transfer the fluid through the pipe. Motionless mixing means the mixing device has no moving parts. Conduits, plates or baffles within the device manipulate the fluids to divide, recombine, spread, rotate, eddy, swirl or jet the fluids such that they are mixed with the least expenditure of energy and time possible. The fluids are transported by pump or gravity. While most motionless mixers are constructed from carbon steel or stainless steel, they can be built from almost any construction material. The best motionless mixer is the one that delivers the mixing quality desired at the lowest pressure drop, for lowest installed cost and fits in the space available. Ideally, it would be useful to test the mixing ability of each of the various types available with the actual materials to be processed.

However, in a practical sense, that is not possible. It is necessary to rely upon recommendations and the literature of the various mixer suppliers. The mixing quality desired needs to be defined. It is never enough to specify “good” mixing. It must be specified as to sample size, sample frequency, sampling technique, test method and the average concentration and distribution of that concentration. The desired distribution of concentration must be meaningful in view of the use of the product. A mixing line for bottling shampoo and a mixer for catalyst and epoxy resin have very different mixing requirements. The specified end results must be determined and provided to the mixer supplier. The motionless mixers commercially available are of four general types: a series of semi-elliptical baffles, a series of directed channels, a series of helixes and a series of parallel corrugated plates. In order to design a motionless mixer, it is essential to define the properties of each component and the mixture.