Flowserve Corp. (Dallas, TX) has signed a definitive agreement to acquire Ingersoll-Dresser Pumps (IDP) for $775 million in cash. The acquisition will create the world's second largest pump company. Flowserve expects to close the deal in mid-April.

IDP, a business unit of Ingersoll-Rand Co. (Woodcliff Lake, NJ), had sales of $838 million and operating income of $64 million in 1999. IDP produces industrial pumps and specialty pumps for process, power generation, and marine applications. The acquisition will nearly double the size and improve the profitability of Flowserve, which recorded operating income of $25.1 million on sales of $1.06 billion in 1999.

According to Flowserve president/CEO C. Scott Greer, "the acquisition strengthens our petroleum and chemical product offerings and allows Flowserve to diversify in the fast-growing water and power businesses. It also furthers our strategic goal of achieving more balanced global coverage, strengthening our position in Europe, Asia and Latin America."

"From a service perspective," he continues, "not only is Flowserve acquiring some of the best brands in the industry, but we will have access to one of the largest installed bases of process pumps in the flow-control industry."

New Offerings
Ingersoll-Dresser Pumps started out as a joint venture when Ingersoll-Rand (which owned 51% of the company) and Halliburton (49%) merged their pump divisions in 1992. By 1999, the company had grown to 5000 employees operating 42 manufacturing, repair, and distribution facilities in 15 countries; and 82 sales and service offices in 27 countries. It had agreements with 435 agents and distributors in 96 countries, and two joint ventures of its own (Niigata-Worthington in Japan and Thompsons, Kelly & Lewis in Australia. 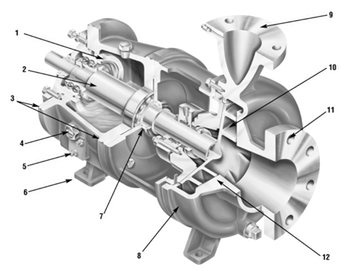 IDP's HOC3 open impeller centrifugal pumpline complies with ANSI/ASME B73.1M and was developed for chemical processes that use aggressive chemicals.

On December 30, 1999, Ingersoll-Rand purchased Halliburton's 49% share of IDP for $377 million. At the time, Ingersoll-Rand president/CEO Herbert L. Henkel said the company wanted full ownership in order to sell off the businesses, along with another joint venture, compressor and turbo machinery producer Dresser-Rand Co. Henkel said the companies no long fit Ingersoll-Rand's focus on climate control, industrial productivity, infrastructure, and security and safety products.

The company is best known for its alloy and nonmetallic pumps for corrosive, toxic, and severe chemical operation, and for its reactor and injection pumps. It also produces a broad range of heavy-duty, high-horsepower pumps for crude oil and product pipelines. It operates three manufacturing plants in both the United States and Europe, and one plant in both Mexico and Argentina. It has quick supply centers located throughout the world.

Flowserve also has two other operating divisions. The Flow Control Div. produces control and manual valves. It ranks among the leaders in the introduction of digital smart valve technology. The company's Flow Solutions Div. services and repairs pumps, valves, and processing systems throughout the world. The division is being merged with process valves and piping system distributor Innovative Valve Technologies, Inc. (Invatec, Houston, TX), which Flowserve acquired in January for $100 million.

Cost Savings
A new, larger (nearly $2 billion) Flowserve has begun to emerge under Greer, the company's new president/CEO. He joined Flowserve in July 1999 after serving as president of UT Automotive, a subsidiary of United Technologies, since 1994. The unit was recently acquired by Lear Corp. Greer helped UT Automotive grow sales by 50%, to $4.5 billion. Earlier, as president and later CEO of Echlin, Inc., he helped the company more than double sales to $3.3 billion.

Greer is also focused on cost reduction. The company is undergoing a $27 million restructuring program that will close 10 facilities and terminate about 810 of its 9000 employees.

Once merged, Greer says Flowserve and IDP will be able to reduce costs by $75 million annually by the end of 2001 by eliminating overlapping facilities and attacking other inefficiencies. He does, however, expect the deal to have a neutral to slightly negative effect on earnings during 2000.

Flowserve will finance the deal with a combination of bank financing and senior subordinated notes. Credit Suisse First Boston and Bank of America have agreed to lend the company $1.425 billion to fund the acquisition. Since that's nearly twice as much as Flowserve needs to close the deal, it will likely serve as a war chest for future purchases.

Greer also announced that Flowserve will immediately suspend its quarterly cash dividend and reinvest the money in growth to better position the stock for future appreciation.